My huz loves pie.  In fact, he frequently says, “Wife, get in the kitchen and make me some pie!”  His mom can whip up a half dozen of these without even breaking a sweat.  My grandma, Evangeline, (Vangie for short) used to do the same thing.  Bring 4-5 pies every where you went, making it look so easy.  Yeah right!   So we both grew up eating pie, and very good, flaky crusts, I might add.  The problem is, I never really made any.  In short, I stink at making pie crust.  This week we got a crate of peaches cause they are in season and oh-so-yummy!  The crate has been staring me down, daring me to make a pie so I did just that.

I was quietly cutting my butter into the flour when Owen walked in the kitchen to find out what I was doing. I whispered, “I’m making a pie for daddy.”  He asked me, “Why?  Did he do something good?” LOL, I love how kids think!  After I actually did laugh out loud, I responded, “No, just cause I love him, and he really likes pie.”  And I’m a Scandinavian American, for heaven’s sake.  I should know how to make pie and lefse without a recipe, I thought to myself.  AND it should be good!  The reason we were whispering is I’d rather huz not know if I flopped it, just in case that happened.  Just hide the evidence and try again some other time.  Logical, right?

So I dug out this recipe from my grandma. Its written in her handwriting so its very special to me.  Side note: grandma makes pie up in heaven now. If I’m guessing correctly she has probably given herself the title of “Vice President of Pie Baking”.  She’s a bit bent toward being dramatic and I have a little bit of her #flair.  🙂 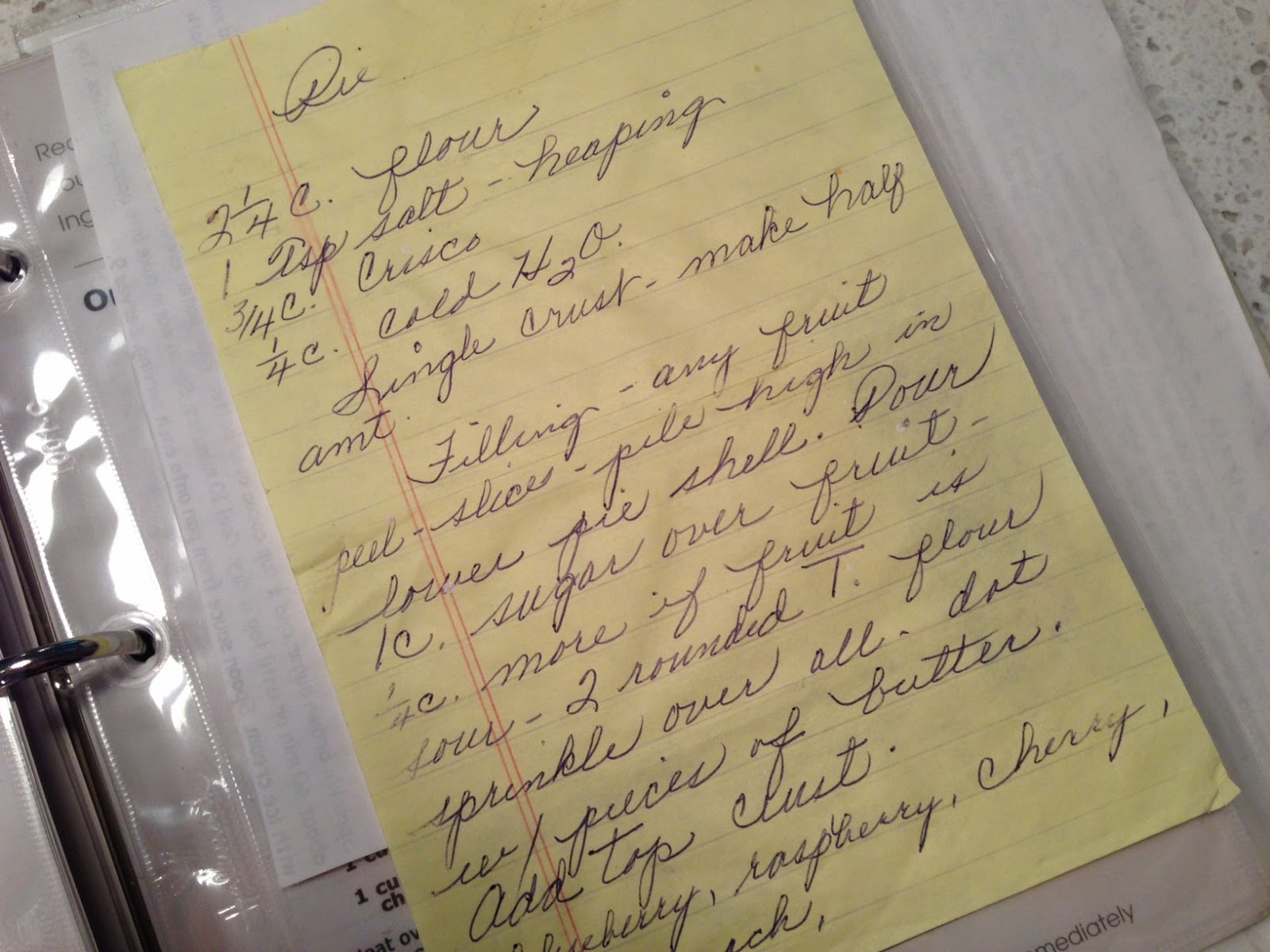 She wrote this recipe up for me shortly after I got married and realized I was missing this essential skill: Pie Making.  We of course scheduled a pie making party pronto!  Grandma was very “hands-on”.  By that I mean she used her fingers to “feel” the dough.  I kind of like the pastry blender, its so….clean. This may be my core problem.  While she whipped flour all over the kitchen, my sister and I stepped back and giggled.  Pretty much anything that involved grandma Vangie also meant a fit of giggles.  Til we were crying from laughing so hard.  The more we laughed the more she embellished and threw flour–literally.  She also was very stern about not handling the dough too much.  If we did, it would turn out tough like Baker’s Square.  Oh dear. I’ve never thought Baker’s Square pie was tough.  Now I’m really in a pickle, how do I know if my pie crust is good?  Please let my crust be flaky!

As I thought back to all grandma’s advice I muttered out loud that I can’t handle the dough too much or it will get tough.   Owen assured me after helping me complete this pie that it was going to be good. He said it looked just like the cartoons.  He also said it looked so good that he was going to try pie for the first time.  This is huge for my picky little eater and it warmed my heart that he would try something new just so he could encourage me.  He did try it and I got a thumbs up.  He said, “Yep, mom, the crust is flaky.” Woot!

So I made a few modifications to the recipe.  I substituted butter for the Crisco.  My momma says butter is better.  We agree!  I skimped on the salt, no heaping here, just a few shakes.  I also only put about 1/4-1/3 cup of sugar on the fruit as it was extremely sweet already. I added about 1/4 cup of flour since the peaches were really juicy and about a teaspoon of cinnamon cause it rocks the flavor.  We topped it with some whipped cream so you didn’t even miss the extra sugar.  And don’t forget to add the love, its the most important ingredient!

I know Owen doesn’t know the difference between tough and flaky crust since this was his first time eating pie, but it has boosted my confidence.  I’m going to try for an apple pie this weekend.  Cause what is more Scandinavian American than apple pie?  #practicemakesperfect Have a great holiday weekend!